You can read “White Caravan: a death fugue in my mother’s voice” on Zoeglossia, as part of a series of disabled poets curates by Liv Mammone. Be sure to check out the other wonderful writers in the series.

For my birthday, I ask that you join me in raising $1,000 for National Indigenous Women Resource Center to support Indigenous survivors of rape, domestic violence, human trafficking, and related crimes. Indigenous womxn are targeted, and suffer this type of violence up to 10x more than Caucasian women, depending on the location. Romani womxn in Europe face similar types of targeted violence at similar rates, and since we it’s July, I’ve been thinking about ways to be a better ally to Indigenous communities. As a survivor of sexual assault and domestic violence, this is close to my heart. I’ve seen the way this kind of targeted violence has devastated my Romani family. I live on stolen land where the Indigenous communities are still fighting valiantly for basic rights, and that means I have an obligation to support this fight. Indigenous-run organizations are doing important work, and I admire their activism. I invite you to join me in supporting their work, no matter how small the contribution. If you can’t give, please make an effort to share this charity and amplify Indigenous voices this month. Champion Indigenous artists, writers, innovators, humanitarians, and more and share their work with me and others in your circle. Thank you!

I’m teaching a virtual palm reading workshop for Seagrape Apothecary on August 2nd, 1 PM PST on Zoom. I’m going to cover a brief history of palmistry, how persecution and stereotypes have shaped Roma’s relationship to fortune telling, the basic art of how to read a palm, and how to strengthen your interpretations. My grandmother began teaching me how to read palms when I was five, so it’s a practice very dear to my heart. I’m excited to talk about the practical and political side of this branch of fortune telling, as well as the spiritual perspectives that some readers have. You can register here through EventBrite!

I love Lisa Marie Basile‘s new book, Light Magic for Dark Times. “Basile’s magic feels like a dip into The Artist’s Way for witches,” which is no surprise since you may already know her creative writing, and Luna Luna Magazine, which she runs and founded. The spells she writes benefit from her poetry, and the journaling and other reflective exercises help the reader heal and learn about themselves before they even light a candle.

While the book is geared toward femme spirits, Basile’s language and focus is mindfully intersectional and gender-inclusive, embracing of fluid and non-binary identities, and all bodies and body types. The focus is always on self-love and self-care, particularly for marginalized people who may feel ground-down in the day to day of our, lately dark, times. There are spells for healing burnout after social justice protests, trauma, chronic illness, grief, and discrimination, and as always, the focus is on increasing love and kindness in all of its forms. In short, bringing the light in.

To learn more about what I love about the book, her work in shadow magic, and the ins and outs of ritual, check out my review for BUST.com. I’m looking forward to revisiting this book for years to come, and I hope all you artists, witches, and wonderful sprites answer if it calls to you. 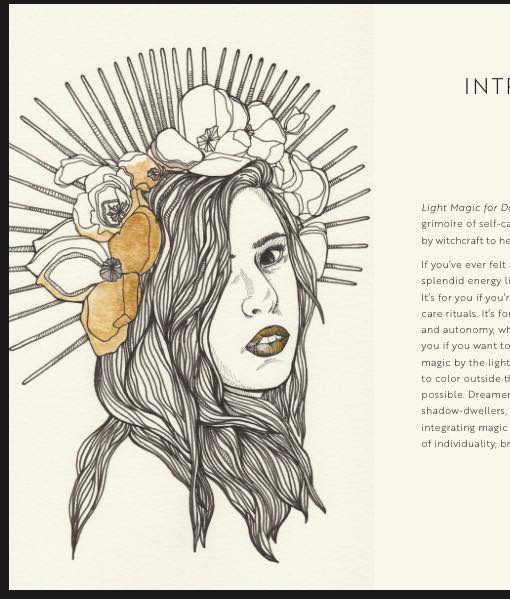 Illustration of the author in Light Magic for Dark Times

Here are the slightly belated #WeirdHoroscopes for the week of May 6th by Jezmina Von Thiele, delayed because of the underworld of finals. Have a weird week, babies.

#Taurus You have the ability to speak with the wind, & it’s as sick of bullshit as you are. You & the wind are the ultimate power couple, calling the ethereal shots between pillow talk & erosion. Use your joined powers for hilarious pranks & more noble ends.

#Gemini If your version of reality doesn’t match others’ then the lesson you should take away is that reality is meaningless & we are but the brilliant scatterings of light flung from the void’s disco ball. Don’t let the universe gaslight you. Get up to get down

#Cancer It’s the ideal time to lead a rebel army of affectionate puppies & assorted baby animals. Take to the streets with extreme cuddling. Stage a hostile takeover of the UN & do not relent until everyone has snuggled & frolicked to peace. It’s your destiny.

#Leo You’re lucky that you alone know how your friends should run their lives & how the universe should be arranged. Expect an invitation to star in a reality TV show in which you join the pantheon of divine beings & intervene as desired. Shit’s gonna get cray.

#Virgo You are going to makeout with a chaos fairy & leave a trail of mayhem & destruction, like blood-soaked flowers traipsing from a murder scene—the liberating murder of your ego, of perfectionism, & also an actual murder. Have a good time, baby.

#Libra The Roma believe that Death is a beautiful woman & it’s true. She wants you to look your fear of loss in the eye, cloak yourself in your most toxic perfume, & get sexy. Your children will be bats, then charming ghosts, & you & your death will rule eternity

#Scorpio You have fought with god & won. Lilith will throw you a celebratory witches’ soirée this week. The attire will be sabbath casual, black cat optional, bring your our goblin. Try the punch. It’s definitely not blood.

#Sagittarius it’s time to balance your side hustles. Working dark magic by night, ferrying sacred crocodiles across the Nile by day, and reassembling Osiris to impregnate yourself with the sun king is too much for any winged being. Streamline, baby soul.

#Capricorn If you are bearing the guilt of ages, let down your burdens. You are not the reason why Rome burnt while Nero fiddled, or why all those Vermeers, or why your closets are full of dead spiders. Go outside & scream ABSOLUTELY NOT to absolve yourself.

#Aquarius You have built an intricate underground system of tunnels & refuse to resurface, but some of the world’s greatest leaders were also gophers or lived among them. Let your subterranean friends lift you up, figuratively, & help you find your power.

#Pisces If you feel an urge to test the laws of gravity, refrain. You have people who support you, but not on this. Your perceptive lunar magic is powerful but gravity is a mistress who will not be ignored. Look at the ground & say, I ACCEPT, to clear your heart

#Aries Instead of slaying the dragon, become the dragon. Toughen your flesh into scales, hoard treasure in an enchanted mountain cave, & study fire breathing at the circus. You’ll find your life becomes richer, warmer, & more varied.